There are small volcanoes, there are large volcanoes and then there are volcanoes that are so big it’s almost impossible to imagine what their eruption would look like. Haleakala is one of those volcanoes.

A massive shield volcano, Haleakala makes up 70% of the landmass of Maui.

Haleakala (which means “House of the Sun” in Hawaiian) sits in the center of its own National Park, which stretches for 47 square miles, and includes the Kipahula Valley and the Ohe’o Gulch pools.

For a place that could flatten the entire archipelago if it ever erupts again, Haleakala is surprisingly popular and has become a must-visit location for any tourists who venture to the Hawaiian islands. 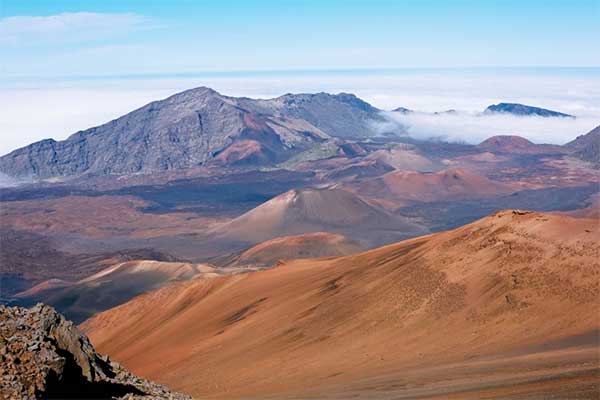 While it’s a very real concern that has occupied the thoughts of more than a few of the people who have ventured to (and those that live their lives in the shadow of) Haleakala, the chances that the shield volcano will erupt again, according to the United States Geological Survey, are remote to non-existent. The Survey has designated Haleakala as being “normal,” which means that it’s dormant and inactive.

It may be peaceful now, but during the last 30,000, Haleakala led an explosive life, having erupted on numerous occasions, and is responsible for creating a large amount of the landmass in, and around, Maui.

The last time it erupted, which was until recently believed to have been around 1790, was almost five hundred years ago, and while there’s no recorded evidence that states how powerful the eruption was, it’s thought, by geologists, to have been a big one.

Whether or not this has anything to do with the fact that it hasn’t erupted since, and doesn’t appear to be in any hurry to do so again, is a matter of popular debate among volcanologists and geologists.

Can You See Lava In Maui?

Whether or not you can see lava on Maui depends on your definition of “lava”. If you want to know if you can see actual, flowing molten rock, slowly making its way across the island, then the answer is no.

The last time that lava flowed across Maui was in 1790, the date of Haleakala’s last eruption. But it wasn’t an eruption that caused the lava to flow, but a period of geological instability.

If, however, you mean rock that used to be lava, and at one point was molten, then yes you absolutely can see lava.

And all you need to do in order to do so is pay a visit to the Maui lava fields, where you can swim in some of the less hot, and more geologically stable inlets.

How Deep Is Haleakala Crater?

If you stand on the rim of Haleakala while sipping an ice-cold drink from the visitor center, which is almost 10,000 ft. above sea level, then the deepest part of the crater will be almost two thousand three hundred feet (or half a mile) below you.

Fun fact: according to popular geological consensus, Haleakala’s crater isn’t a caldera (which is the depression caused when a volcano collapses in on itself after it has cooled down following an eruption).

The crater was formed when two erosional valleys merged at the summit of the volcano. That doesn’t mean that some of its geology wasn’t created by an eruption, but that the volcano wasn’t responsible for creating the crater by itself.

What Is There To Do At Haleakala?

The better question to ask if you enjoy the outdoor life is what isn’t there to do on Haleakala.

One of the most popular things that tourists enjoy doing before they actually venture to the crater and the park, is to book a helicopter tour that’ll give them a 75 minute introduction to the breathtaking vistas and views of the crater and the surrounding area.

There are numerous trails to hike to the peak of Haleakala, to gaze out 100 miles in every cardinal direction, or take a break and rest your legs at the visitor center.

Adrenaline junkies can get their fix by riding a zipline to experience Haleakala in a way few do.

Or, as the sun is setting, hike up to the observatory take in one of the most staggering views of the night sky that you can enjoy anywhere on Earth.

Why Are There No Plants At The Top Of Haleakala?

And because of crater elevation, at its highest point, it stands nearly 10,000 ft. (or two miles) above sea level, the air is so thin it’s difficult to breathe. The levels of carbon dioxide that plants need in order to survive are far too low on the slopes and summit of Haleakala.