Great white sharks are not native to the waters of Maui, but there is always a chance that there may be one lurking just offshore in the deep waters of the Pacific Ocean.

Don’t let that fact turn you off of scuba diving or snorkeling while vacationing in Mau. Why not? Because sightings of great white sharks are extremely rare. Many local Hawaiians have never even seen a great white.

However, if you are worried about encountering a great white shark then you may want to refrain from visiting Maui in fall and early winter. During these seasons a large group of great whites visits the shores of Hawaii.

They swim from the west coast of the United States and Mexico, and many of them are tracked by scientists through GPS units on the sharks’ dorsal fins. A fun fact about these great whites is that they are some of the biggest in the world, some measuring over 20 feet long.

Great white sharks don’t typically attack humans as they would prefer to snack on seals and other marine mammals. But they are opportunistic hunters and do sometimes attack unsuspecting people, though the chance is about 1 in 11.5 million.

To put that in perspective, the chance of being struck by lightning if you live in the United States, in your lifetime, is 1 in 3,000.

There is a very low chance of ever encountering a great white shark in Hawaii.

But it’s still recommended that you exercise caution while swimming or engaging in other water activities, especially if you plan on heading off the beach or into deep, open waters of the Pacific. 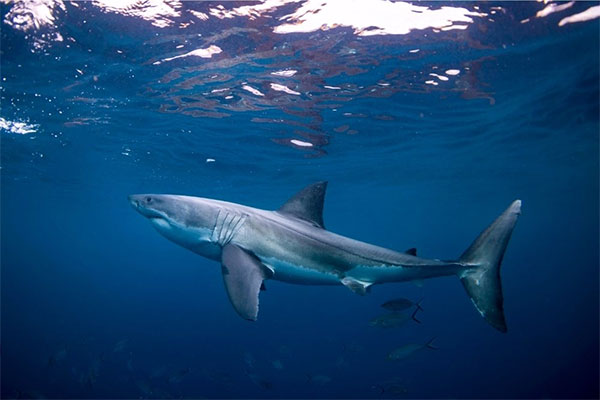 Are There Sharks In Maui?

Yes, there are a variety of shark species that live in Maui, Hawaii.

In the Hawaiian language, sharks are known as Mano and are even given the title of ‘aumakua, which stands for traditional family guardians in Hawaiian culture.

In Hawaiian mythology, an ‘aumakua is a family god that is believed to be an ancestor taking the form of a physical being. An ‘aumakua can manifest in a variety of ways, though the most common is an owl, octopus, bird, and also as shark.

For this reason, sharks are very well respected in Hawaii, and many Hawaiians refrain from hunting or eating sharks.

It’s no surprise then that there are a great variety of sharks living in the coastal waters of Hawaii, including the waters surrounding Maui.

The most commonly seen shark types in Maui are the white reef tip, black reef tip, scalloped hammerhead and sandbar shark. It’s rare to see one of these sharks up close, especially at the beaches on Maui.

The reef shark has never caused a human fatality but swimmers have been bitten by their curiosity. So, if you happen to be snorkeling or scuba diving and see one, calmly make your way to safety until they swim away.

The sandbar shark may be the most docile of all sharks commonly found around Maui. They’re characterized by their shyness, and avoid human interaction to the best of their abilities.

Though they avoid humans, their large size can pose a slight risk if they’re surprised by unwanted attention. As always, when dealing with any wildlife, the best is simply to exercise caution while visiting their homes.

Besides the four most common types of sharks, there are also whale sharks, tiger sharks, and great white sharks (as discussed above). Although sightings of these sharks are far less common.

How Close Do Sharks Come To Shore In Maui?

Even though there are a variety of sharks that live in the waters surrounding the Maui island, sightings of sharks are rare, and coming into close contact with one is even rarer. There’s no reason to let the idea of sharks scare you off from scuba diving and snorkeling.

Generally speaking, sharks tend to stay far away from humans. When they do come close to shore in populated areas it’s typically in heavily fished waters or murky waters after rain: sharks prefer the temporary cover caused by rainstorms, as this gives them an advantage while hunting fish and other aquatic life.

Also, avoid swimming in the ocean at night. Nighttime is when sharks are most active and likely to swim inshore to hunt fish.