As a general rule, Maui has amazing weather, but that doesn’t mean it never rains.

On average, the rainiest months are December and January, totaling about 2.5 inches of rain overall. Not much, but a cloudy day might spoil the beach so most tourists choose to avoid visiting Maui during the rainy months.

But, Maui is an island. Each region of the island has its own weather patterns that aren’t represented in the average above. Taking the whole island into account, the whole rainy season is between November and March.

Below, we outline Maui’s weather patterns according to the month of the year and by region of the island. 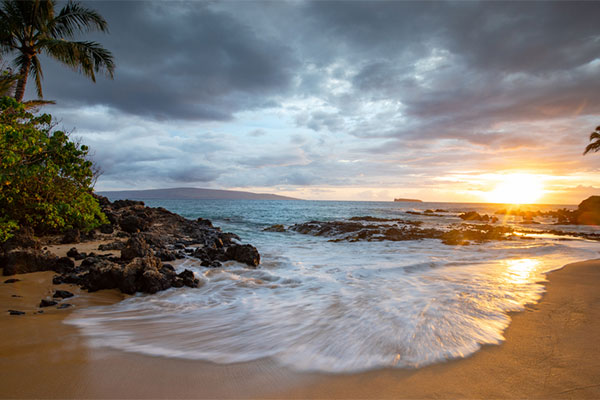 Weather in Maui according to the month:

Between December and February forms the bulk of the winter season, as these months feature the lowest temperatures on Maui, an average of 81°F during the day. They’re also the wettest months, especially January.

But, they are also great months for surfing as waves tend to be at their peak.

These months are a bit of a mix when it comes to the weather: sometimes it’s hot, sometimes it’s cool. There are also a few rain showers now and then.

Between March and May the weather changes rapidly, so it’s best to be prepared and pack an umbrella.

June and July are summer months, dry and warm and full of sunshine. These are also the most popular months for tourists, so be warned that the island will be busy with people. Pack plenty of sunscreen.

August and September are the pinnacle of summer in Maui, with heat at its maximum and tourists at full capacity.

During October and November the winter season starts. The temperature cools, and there are light showers now and then, but overall they’re great months to visit the island.

Weather in Maui according to the region:

Located on low ground next to the coast, Leeward West is one of the driest and warmest areas on the island. The further West you go in this region you go, the more lush and diverse the landscape becomes, and the wetter the weather.

Keep in mind that the West tends to get some serious bushfires during some summers due to its dryness.

In Central Valley you can find the locations of Maalaea, North Kihei, and Kahului. This part of Maui is dry and windy, with the valley being the home of most of the island’s sugar cane fields.

This region is located in the South of Maui, so you might sometimes hear it called “South Maui.” This is a hot spot for tourists. Leeward Haleakala has the driest and warmest weather of all regions.

There’s barely ever a bad weather day in Leeward Haleakala. However, the higher altitude you go in this region, the cooler the temperature becomes.

If you take the Road to Hana while in Maui, you will notice that the entire day trip is in the region of Windward Haleakala.

Full of tall slopes and wind that blows in from the ocean, this is the wettest region on the island, as well as one of the most humid. No matter the time of year, you will likely see some rain if you are in this part of the island.

At over 10,000 feet high, the summit of Haleakala volcano is well above the clouds, and towers over the entire island of Maui. As it’s so high up, the temperatures will be considerably low, no matter the time of year.

It will also be windy and humid, and you might experience rapid changes of weather, as well as plenty of clouds. When visiting the summit, make sure you have warm clothing with you, and don’t be too surprised if clouds block the view.

What is the coldest month in Maui?

Maui has lovely warm weather all year around. However, during the winter season the temperature does become a little cooler. For some tourists, this is something to avoid, while others prefer the coolness.

But whatever the reason, if you want to know which is the coldest month in Maui, then we have the answer: it’s January.

As you can see, as far as the rain is concerned, what month you choose to visit Maui doesn’t matter too much. If anything, we recommend you check which months belong to the high season, and which to the low, so that you can avoid the huge mass of tourists during your visit.