Maui is an incredible place to swim and snorkel. While submerged in the ocean, you encounter hundreds of different tropical fish, vibrant coral, tons of turtles and the occasional manta ray if you’re lucky.

But how likely are you to be face-to-face with a shark while zoning out on a turtle peacefully swimming in front of you?

With millions of people swimming in Maui’s waters every year and only a small number of these endangered fish, the answer is close to none.

Although being scared of sharks is a relatively reasonable fear to have, being informed about sharks, their habits and what causes them to attack humans (by mistake) is a good way to feel at ease in the ocean and diminish, if not erase, any fear you might have. 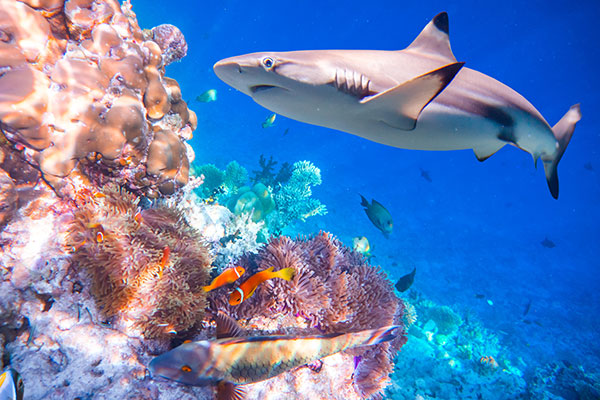 Where is Turtle Town on Maui?

Turtle town refers to two different places in Maui, both of them located in South Maui. The first, a popular stop on snorkeling tours, is off the shore of Maluaka Beach in Makena. Most snorkel tours in Maui depart from Maalaea Harbor and take you to Molokini Crater first, then head to one or more spots in the Kihei area, usually Turtle Town, off of Maluaka Beach.

This spot is accessible by boat only, as it is quite far from the shore.

Another popular area for snorkeling with turtles is at Makena Landing, just up the street from Maluaka Beach.

However, the chances are still very slim and you are more likely to encounter small and harmless reef sharks in these areas than being full on attacked by the more intimidating tiger shark.

Should You Be Scared of Sharks When Snorkeling?

As the most isolated chain of islands in the world, Hawaii doesn’t have a lot of scary creatures roaming around. That’s because most animals are not endemic to the islands and were once brought by navigators as trade. That’s why you won’t find snakes for example. However, marine life is abundant in the islands.

The scariest marine predators are sharks, like great whites.

We have 40 different species of sharks in Hawaii, most of them harmless. The most frequently spotted include the white-tip reef shark, the sandbar shark, the scalloped hammerhead and, occasionally, the intimidating tiger shark.

But sharks are not actually as dangerous as people think they are. Although all sharks qualify as predators, only tiger sharks in Hawaii are responsible for the occasional attacks.

Most shark attacks happen because sharks mistake a person for an animal (especially in murky waters), generally a turtle or a monk seal, a delicacy for tiger sharks.

In reality, sharks are very elusive and are hard to catch a glimpse of even when you are looking for them. Sharks are very hesitant to come close to humans and are actually more afraid of humans than we are of them.

What Are The Chances of Being Attacked by a Shark?

Although shark attacks always make the front page of any local newspaper, they are very rare. Statistically, you have higher chances of getting hit in the head by a falling coconut or experiencing a deadly plane crash than you are being attacked by a shark, let alone dying from it.

Only a handful of shark attacks have happened in recent years in Hawaii, and are almost always non-fatal.

According to data gathered by the Florida Museum of Natural History, 176 unprovoked shark attacks have been confirmed in the state of Hawaii since 1837. That’s less than one per year. That also puts Hawaii second on the list in the United States for shark attacks after Florida, which totals 868 attacks in the same time frame (yikes!).

All attacks that have been reported happen to swimmers, snorkelers, and surfers because of their surface activity. In comparison, no attacks on scuba divers have ever been reported.

You can actually track tiger sharks in Hawaii online, on the Pacific Island Ocean Observing System’s website. Before tracking in Hawaii started in 2016, scientists thought tiger sharks stuck to a particular area. But it turns out they occupy huge ranges of territory, hunting and swimming from island to island.

People who live in Hawaii are also aware that such attacks are more likely to happen between October and December. Ever heard of the term Sharktober? Well, now you have.

How To Avoid a Shark Attack When Snorkeling

Still not convinced? Here are a few rules to obey by to avoid attracting sharks when snorkeling in Turtle Town or elsewhere:

Basically, do your best not to look like a turtle!