Molokini is a volcanic atoll created by an eruption some 230,000 years ago.

The atoll begins about 2.5 miles from the tip of Maui’s southern shore.

It is true to say though that the distance, while being absolute in geography, sometimes depends in terms of accessibility on how you approach the atoll. 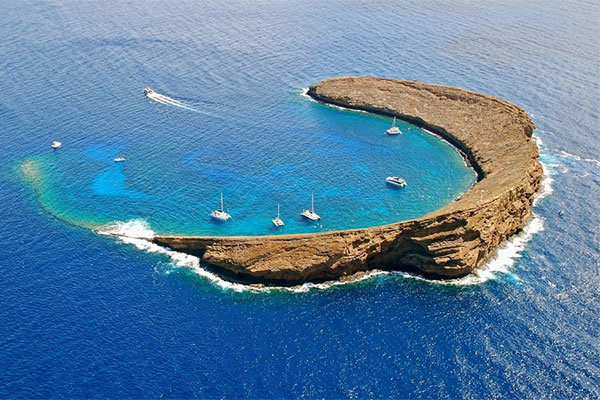 What does that mean?

It means that, were you simply to swim underwater, 2.5 miles off the southern coast of Maui, you would encounter the beginnings of the Molokini Crater.

We cannot stress too highly how much you cannot simply do this.

You can only legally and safely approach the crater by boat, and there are 3 areas from which boats depart for Molokini, either by boat or by catamaran.

Where this gets complicated is that the places from which the boats leave necessitate what is technically a 9 mile journey, taking around an hour’s boat ride, to get to the atoll which is just 2.5 miles off the coast.

You see? Absolute position, relative distance. Navigation is weird like that sometimes.

It’s that profusion of aquatic wildlife, along with the rareness of the crater itself, that explains the difference between the absolute position of Molokini—2.5 miles of Maui’s southern coast—and the 9 mile journey to get there.

The truth is that, while Molokini Crater itself is very close to Maui’s southern shore, and while the crater is only around half a mile wide and visible from the shore as it rises to a summit some 162 feet above sea level, it is part of a much larger protected habitat.

77 acres of underwater terrain, including Molokini Crater, have been officially declared a Marine Life Conservation District. Under that classification, 260 fish species and 38 coral species are protected.

The taking of sand or coral from the region is prohibited.

And fishing, feeding nor harming of any marine life in the zone is strictly prohibited. It is even a criminal offence to set foot on the crater itself, be-flippered or otherwise.

The water around Maui, and around Molokini in particular, is ridiculously clear, often allowing visibility of up to 150 feet.

So, while the State preserves the sanctity of the Conservation District and the crater, snorkelers and scuba divers can spend hours (usually up to 5 hours at a time) investigating the undersea world of the District.

That’s the secret of the discrepancy between the distances.  When you take a boat trip to snorkel around Molokini, you’re traveling some distance away from Molokini itself, but still within the undersea Conservation District.,

On the one hand, you get to see all the creatures and corals of the region, and on the other, they remain unharmed by your presence in their world.

What kind of creatures are near Molokini Crater?

As well as endless multicolored fish, the Conservation District is rich in other major marine attractions, including whales, dolphins, and especially turtles.

While there are no turtles strictly at Molokini itself, there is a habitat locally where Hawaiian green sea turtles, or honu, live and thrive.

Part of an entirely different reef system, this “Turtle Town” is a frequent stop on snorkeling tours, so people get the chance to swim with the incredible reptiles, as well as the fish, mammals and porpoises that make the Conservation District as vivid an experience as it is.

While Molokini Crater is physically close to the southern coast of Maui, at just 2.5 miles offshore, as a part of 77 acres of protected habitat has helped preserve it in a relatively pristine state.

Both by taking seriously the importance of the need to maintain the environment, and by allowing visitors to get a sense of the life and diversity that exists so close to shore, the Molokini Crater has struck a balance.

Tourism, natural history and conservation efforts have been working in harmony, so that people can experience the wonder of the underwater environment and its rich diversity of life, while still protecting precisely that diversity, just a couple of miles off the shore of Maui.