People come from all over the world to visit Maui.

Why? Because Maui is an island which manages to cram a great number of spectacular marvels into a relatively small amount of geography.

One of the reasons people come to Maui is to face their fears by driving the 64 miles of the Hana Highway. 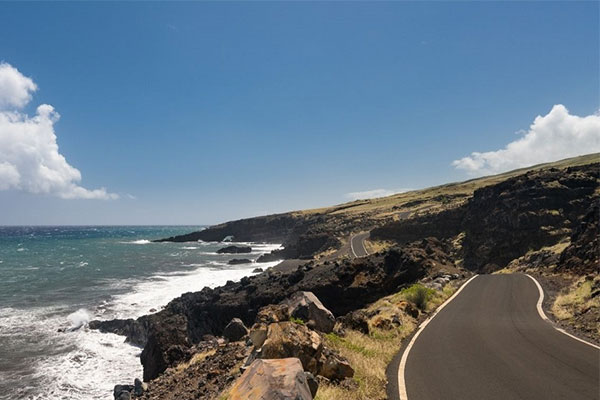 What is the Hana Highway?

Running from Kahului (or “where the airport is,” as you might otherwise know it) to Hana on the east of Maui, the Hana Highway is a clifftop and a coastal road.

There are 620 bends, many of them extremely sharp or hairpin turns, over the course of that 64 miles. On average, that’s one bend every 176 yards.

It includes 59 bridges during that 64 miles. If you averaged them out, that would be one bridge every mile but five. Of those 59 bridges, 46 are single-lane bridges dating back to 1910.

For much of the highway, there is barely 20 feet of visible road ahead of you at any given time. The weather is often wet and windy. There have been known to be rockfalls.

Enough of a thrill ride for most people, no?

And yet, while the Hana Highway exists, with all its driving challenges exacerbated by regular domestic and tourist traffic, it’s often regarded as “the safe part” of the road around Maui.

The Hana Highway is one of Maui’s best driving surfaces. But a fearful legend exists that once you’ve driven the Hana Highway, you must simply stop. The road up the western side of the island, past Haleakala, seems to be impassable.

Even some of the official car maps for the western coast road of Maui say there’s little to see that makes it worth the drive.

Here’s the deal. There are three myths about the western road from Hana, past Wailea-Makena, up past Lahaina, and round to the island back to Kahului.

First: the myth that there’s nothing worth seeing on that side of the island.

This is a patently ludicrous assertion.

And there’s much more than that, too, all of it usually ignored by tourists who have been told there’s nothing that warrants the drive.

Second: the myth of the unpassable, unpaved roads.

It is a standard myth about the road from Hana round the western side of the island that it’s a car-shredding dirt track that will shake the guts out of anything but the most reinforced monster truck.

Yes, it is technically true that some stages of the road up the western side of the island are not properly paved. But the roads are graded and graveled, and you should be able to make it round the island without giving the last rites to your perfectly standard Maui hire car.

The dangers have been wildly exaggerated.

One caveat applies to these facts: check the weather before you set out.

More extreme weather events can make some parts of the Western roads impassable.

But most of the year, you should have only an invigorating ride, rather than an impossible one.

Thirdly: the myth of the evaporating hire car contract.

Go up the western road, and you will be told by everybody—including the hire car companies themselves—and you will invalidate your hire car contract.

At least, not technically.

What will happen if you go up the western road, from Hana onward round the island, is that the hire car company won’t send their tow trucks to rescue you if you have an accident.

That may land you with a hefty account to settle, but it’s not as though the hire car companies simply leave you to the buzzards and never speak your name again.

In short, then, yes, you can drive all the way around Maui from Hana. It’s not for the faint-hearted, but then, neither is driving down the Hana Highway.