Hawaii has strict rules about what plants, foods, and animals are allowed on the islands.

Why? Because they can be armful to Hawaii’s natural ecosystem, including native species. Which is why, for the most part, there are no large predators in the islands of Hawaii, despite the tropical environment.

But what about snakes? Are there snakes in paradise? 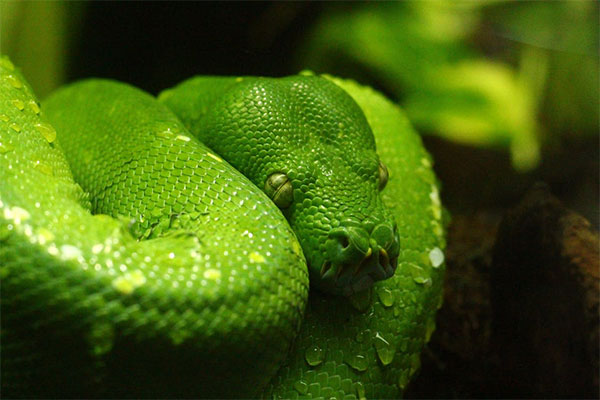 Are there really no snakes in Hawaii?

Nope, there are no snakes in Hawaii. Snakes aren’t native to the island, and residents are not allowed to own a snake as a pet.

Snakes have no natural predators in Hawaii. If they were accidentally released into the wild they would compete with the native animal population for food and shelter, thereby disrupting the islands habitats.

If anyone is caught importing a snake or owning a pet snake, they could be charged with a Class C felony, and fined up to 200,000 dollars.

For new citizens of Hawaii who travel with their snakes, Hawaii has an amnesty program. Illegal animals  can be surrendered to local zoos, humane societies, or Department of Agriculture. The animals are then be quarantined and stored until they can be safely removed from the island.

Why are there no snakes in Hawaii?

Hawaii is very serious about the plants and animals that are allowed on the island. As stated above, snakes pose a serious threat to the island’s native wildlife, endangering birds to the point of extinction.

Snakes are therefore considered an invasive species, and are banned entirely.

There may however be the few odd snakes, but these would be scarce as they’re only able to get onto the island via boats, or other transportation accidentally.

Do they have venomous snakes in Hawaii?

There are no venomous snakes in Hawaii, along with no large dangerous predators such as crocodiles, large cats, bears, or wolves. However, this does not mean that you should let your guard down in Hawaii.

There are plenty of dangerous plants and species in Hawaii that can be venomous . In addition, you can come across yellow-bellied sea snakes in the waters around the island.

What is the most dangerous animal in Hawaii?

While Hawaii does not have snakes, there are other threats that you need to look out for.

The first of these are box jellyfish. These are one of the deadliest creatures on the islands, and can sting and shock humans, causing them to die of heart failure or to drown.

There are also long-spined venomous sea urchins that lurk in the depths of the waters of Hawaii, that can be very painful when touched. While they are not deadly, trust us, you will not want to step on one of these, as their spines can break off and become lodged in the body causing a lot of pain and discomfort.

There are also four species of venomous spiders in Hawaii, and countless plants and vines that you should steer clear of. While there may be no snakes, you should always be wary within the forested and lush areas of Hawaii, as you never know what wildlife may be lurking around you.