Where do you go if you want a unique water adventure on Maui? You can try snorkeling at turtle town or surfing the North Shore. Maybe take a dip among the corals at West Maui.

For something that you really can’t do anywhere else, head for the water elevator at the Grand Wailea!

The Grand Wailea is home to the world’s only water elevator, an engineering feat that works entirely on the power of water. Learn more below. 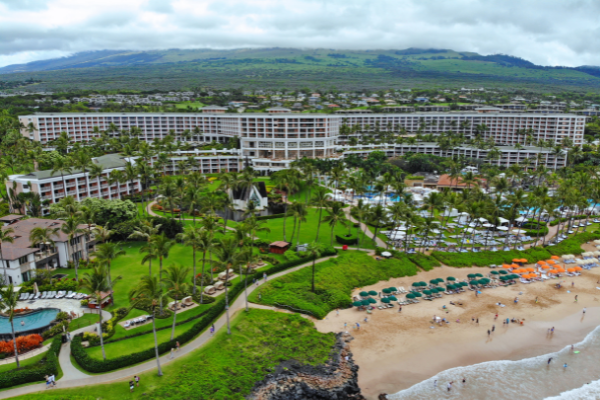 Where Is Maui’s Water Elevator?

You can find a lot of things in the Canyon activity pool at the Grand Wailea resort. There are five intertwining slides, a Tarzan rope swing, jacuzzis, and even a sand beach.

All pretty standard for a water park, right? One thing you might not expect to find is a water elevator!

It’s integrated into the activity pool at the Grand Wailea resort and has been in operation since 1991.

You might have heard of the Wailea water elevator, but that doesn’t mean you have any idea what it actually is.

A water elevator isn’t exactly something that most of us come across in our everyday life (unless you happen to live at the Grand Wailea). A water elevator is essentially an elevator that operates using nothing but the power of water. There’s no electricity involved, no strange mechanics.

By simply directing large amounts of water into one place at a single time, a floating platform lifts up, transporting guests from the bottom of the water park to the top.

It takes 16,000 gallons of water to operate the Grand Wailea water elevator, and the whole thing can seem like a pretty mysterious process.

You’d be forgiven for thinking there was someone behind the scenes with pulleys and levers getting the elevator to go, but it really is just running water.

Looking for the Grand Wailea water elevator? It’s hidden in a volcano at the heart of the water park.

The elevator itself is locked away behind a thick steel door. A porthole window gives guests a chance to catch a glimpse of the elevator before going on a ride.

Entering feels a little like stepping into a Bond film—passing through a submarine door to enter the side of a volcano!

Through the door is a chamber, built to look like the cave of a volcano. A small waterfall cascades down the side of the chamber. At the center of the volcano is a strange metal platform, with a bench-like seat around the edge and a metal pole in the middle.

As a warning for anyone who gets claustrophobic, the space is a little tight. But there’s enough room to fit over 10 people in.

Once everyone is situated, the door shuts behind you, and the chamber starts to flood. But don’t panic. This is when the platform starts to rise. Slowly, you’ll find yourself floating to the top, with the platform floating and spinning on the water.

The entire journey takes around 1 minute 40 seconds, lifting you from the bottom levels to the top.

What Happens At The Top?

Once the chamber has filled with water, you’ll find yourself at the top of the volcano.

Riders then exit, and can make their way all the way back down using another slide. Getting down from the water elevator is definitely quicker, but slightly less cool.

When the passengers have gotten off, the door is closed, and the chamber begins to empty.

You can actually see the water drain out, because it spurts out from the volcano found at the lowest level of the pool.

If you stand next to the volcano, you can see the water as it flows into and out of the chamber, and you can watch as those inside the elevator slowly start to rise.

And now that you’re back down at the bottom, you can ride the water elevator all the way back up again.

How Does It Really Work?

There really is nothing more to the water elevator than a very clever understanding of the sheer power that running water can have.

And even that’s controlled by a series of small doors, used to ensure the water only comes and goes exactly when it needs to.

As the water rushes into the chamber, it causes the pipe to spin and the platform to float, successfully transporting any riders to the top.

What Else Can You Do At The Grand Wailea Pool?

The water elevator is far from the only exciting thing to do at the Grand Wailea pool, although it is the most unusual.

The activity pool at the Grand Wailea is home to a water adventure, and it includes a whitewater rapid slide, plus five intertwining sides.

Keiki and adults can really spend an entire vacation exploring the pools at the Grand Wailea.

Adults who perhaps want to take a break away from all the excitement can head to the adults-only Hibiscus pool. This simple pool is set in a quieter part of the resort and doesn’t feature a water elevator.

But it does have a tranquil atmosphere that can’t be found at the main pool.

Maui is famous for being one of the best spots in the world for surfing, snorkeling, and bodyboarding.

The water elevator is a slightly more unusual take on a Maui water adventure. This is the only water elevator in the world, and it works because it’s such a simple concept.

If you’re staying at the Grand Wailea, make sure to check it out!