For many people, the idea of moving to Hawaii sounds like moving to paradise.

But, the cost of living in Hawaii has skyrocketed in recent years. The capital, Honolulu, is the seventh most costly place to live in the United States.

So, why exactly is it so expensive to live comfortably in Hawaii? Where would your money be going if you decided to make the move?

These are the questions we’ll be answering in today’s article, scroll down! 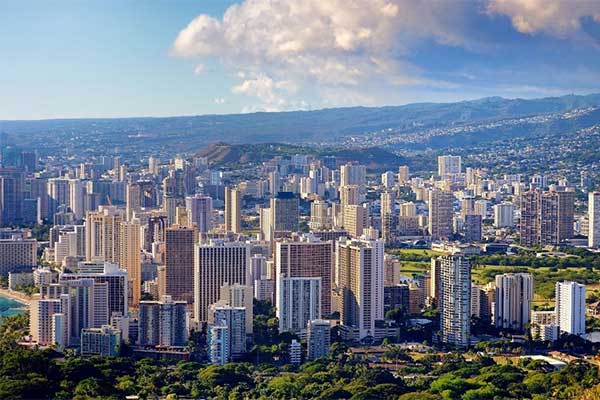 Why is Hawaii so Expensive?

There are several economic factors that have contributed to the rising cost of living in Hawaii over the years, but the single most influential factor is that Hawaii is a collection of islands.

All imported goods come at a high price, and that includes 90% of food on the island. So, groceries are not cheap.

Utilities are also expensive. Hawaii is hot, so air conditioners are typically turned up, and most energy resources also have to be imported to the island.

So, who has moved to the island? The wealthy, thereby making property quite expensive, (land averaging $100,000 per acre) when combined with the islands’ heavy reliance on imported goods.

The cost of accommodation varies significantly depending on your location and, of course, the size of your home or apartment.

In central Hawaii, you can expect to pay anywhere between $1,000 and $1,600 a month for a studio apartment.

Housing is typically less expensive the further away you get from central Hawaii.

As mentioned above, buying groceries in Hawaii is more expensive than anywhere else in the United States import costs.

Purchasing one gallon of milk in Hawaii costs at least $5.50. A pound of carrots is priced at roughly $3.50, while the same amount of broccoli costs nearly $3.80 on average.

While buying local produce in Hawaii is recommended, this can also deplete your funds significantly. Buying Hawaiian mangos by the pound, for example, comes to $6.99.

For the same reason, dining out in Hawaii is a costly experience.

The easiest way to get around Hawaii is by car, and if you do buy a car you’ll need to take into consideration the cost of gas in Hawaii. Currently, the price of gas per gallon is roughly $3.16.

Another cost that comes with owning a vehicle in Hawaii is parking.

The most cost-effective method of securing consistent parking in Hawaii is to rent a parking space, although this comes to about $150 per month.

If you don’t want to or can’t afford to drive, you’ll need to arrange commutes via public transport. You can buy a bus ticket for $2.75.

Most homes in Hawaii need air conditioning, which can bump your electricity bill up to $190 per month.

Luckily, one financial advantage Hawaii has over other areas of the United States is its property tax rate, which is 0.35% on average.

You will, however, need to pay between 1.4% and 11% income tax, depending on how much you earn.

The most cost-effective way to receive healthcare in Hawaii is through employment health coverage plans.

On average, one of these plans will cost $4,664, which is roughly $2,500 less than the national average for the United States.

Even better, you’re actually less likely on average to need healthcare in Hawaii than in the United States. On average, there is less air pollution combined with lower rates of smoking and obesity.

The average income needed to live comfortably in Hawaii, based on the expenses outlined above, is $122,000 for a family of 4 (2 adults and 2 children). In this scenario, each adult would need to consistently earn at an hourly rate of $17.70.

Of course, comfortable living is subjective, and many people are able to live in Hawaii on a lower income than the average.

For context, the average salary in Honolulu is estimated to be approximately $66,000, although many Hawaii residents live on just under $34,000 per year.

(The above figure takes into account a $2,900 mortgage with a monthly electricity bill of $190 and property taxes amounting to $2,350 each year.)

Assuming that you commute by car, your monthly driving cost will be roughly $380.

You’ll also need to consider groceries which, at Hawaii’s expensive rates, would come to about $900 per month. That leaves $500 for miscellaneous costs such as dining out and other personal expenses.