Pineapples have come to be a shorthand for relaxing tropical destinations, so it’s no wonder you see pineapples everywhere in Hawaii.

But although many of us consider pineapples to be inextricably linked to Hawaii, it wasn’t always that way. In fact, it was quite a journey that took the pineapple across the ocean to the islands.

But what does it mean to see a pineapple in Hawaii? 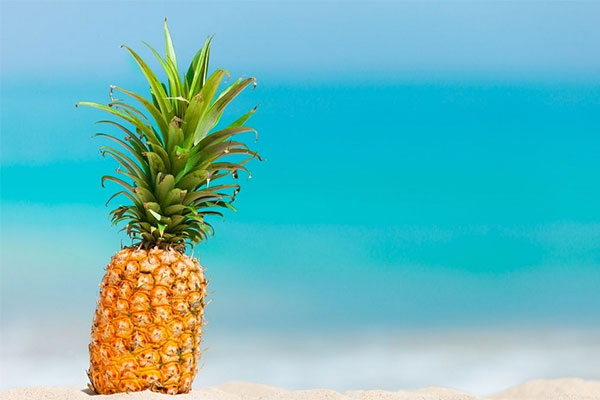 What does the pineapple symbolize in Hawaiian culture?

In Hawaiian culture, the pineapple symbolizes welcome, happiness, and the relaxed hospitality that the islands are  well known for.

In Hawaii, the pineapple is often used in both sweet and savory cooking, and forms an important part of the cuisine. But pineapples are used for more than just eating. They also make fantastic centerpieces in dessert spreads, at luaus, or as garnishes for cocktails.

It’s easy to see why pineapples came to be associated with good times: they stand out in even the most lavish of fruit bowls.

However, it wasn’t always this way. In fact, for a long time, there were no pineapples on Hawaii at all.

In Hawaii, the pineapple is known as the “Hala Kahiki”, which roughly translates to “foreign fruit”. Hala is a type of fruit found on the islands that resembles the spiky outer skin of the pineapple. When  Europeans bought the pineapple with them to Hawaii, it was seen as being a foreign version of the hala fruit.

The history of the pineapple in Hawaii

Pineapples originate in South America, and were probably first found in Brazil or Paraguay. They soon spread throughout the continent, up to Mexico and across to the West Indies. Christopher Columbus first tried them on a trip to Guadeloupe in 1493, and brought the fruit back to Europe.

The Europeans quickly developed a taste for the pineapple, and the fruit was seen as a symbol of status. However, they were almost impossible to grow in a European climate.

It’s not entirely clear when the pineapple first made its way to Hawaii.

Possibly, when the Spanish first arrived in Hawaii in the 16th century, they had some pineapples on the ship with them: as a fruit, they were exceptionally useful for sea voyages. They contain a large amount of vitamin C that helps to stave off scurvy, and were used to clean the ships.

Although commercial farming of pineapples in Hawaii was underway in the 1880s, it didn’t take off until the arrival of James Drummond Dole, when his business moved to the island in 1903.

By the 1960s, Hawaii produced 80% of the canned pineapple sold worldwide. “Hawaiian pineapple” was even marketed as a sign of quality.

These boom years didn’t last. All the large canning factories have closed. Pineapple farming has moved to Indonesia, Thailand, and the Philippines. Nowadays, Hawaii only exports fresh pineapples, on a much smaller scale.

Although the farms may not be there, the association of the pineapple and Hawaii still remains.

Why do we associate the pineapple with Hawaii?

Undoubtedly, the pineapple had a major role in the recent history of the islands. However, that doesn’t quite explain why the image of the pineapple became so associated with Hawaii. After all, Hawaii has many other delicious fruits.

As the pineapple became one of the major businesses on the island, the association between Hawaii and the fruit was highlighted in marketing materials. Pineapples were splashed over magazines, illustrated in brochures, and featured prominently in travel adverts imploring visitors to Hawaii.

But it wasn’t just business interests that linked the two.

The locals certainly enjoyed the fruit, and pineapples began to be used prominently in Hawaiian cooking. With a fruity and sweet smell, pineapple also found its way into beauty products sold in Hawaii. For the rest of the world, the pineapple and Hawaii became firmly intertwined.

Nowadays, on a visit to Hawaii, it’s still common to see the pineapple as a symbol of tropical fun and golden sunshine on the islands.